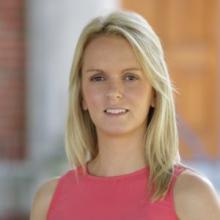 Personal
Marie Bradley graduated with a Masters in Pharmacy (MPharm 1st Class Hons) in 2005 from Queen’s University Belfast (QUB). She completed her professional pharmacist training year in 2005/2006 and became a member of the Pharmaceutical Society of Northern Ireland in 2006. In 2009 Marie completed her PhD in pharmacoepidemiology entitled “An investigation of the role of pharmacological exposures in aetiology and survival of pancreatic cancer” for which she was awarded a scholarship from QUB.

Research
Marie is interested in the aetiology and prevention of cancer. She is particularly interested in the effects of medications on cancer risk, and response to treatments, as well as adverse and/or long-term effects of chemotherapeutic and other pharmacologic agents, such as second cancers. She is currently working within the Division of Cancer Control and Population Sciences at NCI. She is also interested in the appropriateness of prescribing in vulnerable groups and interventions to improve prescribing appropriateness and overall care in these groups. Marie has experience in conducting pharmacoepidemiological studies in large longitudinal databases, such as CPRD. She worked as a post doctoral fellow in the centre for three years before leaving to take up a post in the US. She maintains close links with the centre and continues to collaborate on a few projects, as well as acting as third supervisor to one of the centre’s PhD scholars

Teaching
Marie has been involved in demonstrating to pharmacy undergraduates in the School of pharmacy, at QUB. She is also assisting one of the HRB PhD students.

Memberships/ awards
Marie is a member of the Pharmaceutical Society of Northern Ireland. Marie received a scholarship from the Special Research Fund at QUB to fund her PhD. During her PhD she received a scholarship from the School of Medicine and Dentistry at QUB and the International Society for Pharmacoepidemiology (ISPE) to attend the International Conference in Pharmacoepidemioloy (ICPE) 2008 in Denmark. She also received a scholarship from the Research and Development Office, Northern Ireland to attend the National Cancer Institute’s (NCI) summer curriculum in Cancer Prevention and Control, in Bethesda, Maryland, USA. Marie also received an award for presenting the best poster at a conference entitled “Cochrane in Ireland” in Dublin City University in 2008.